Here are some of the papers that I have manipulated inspired by this image. 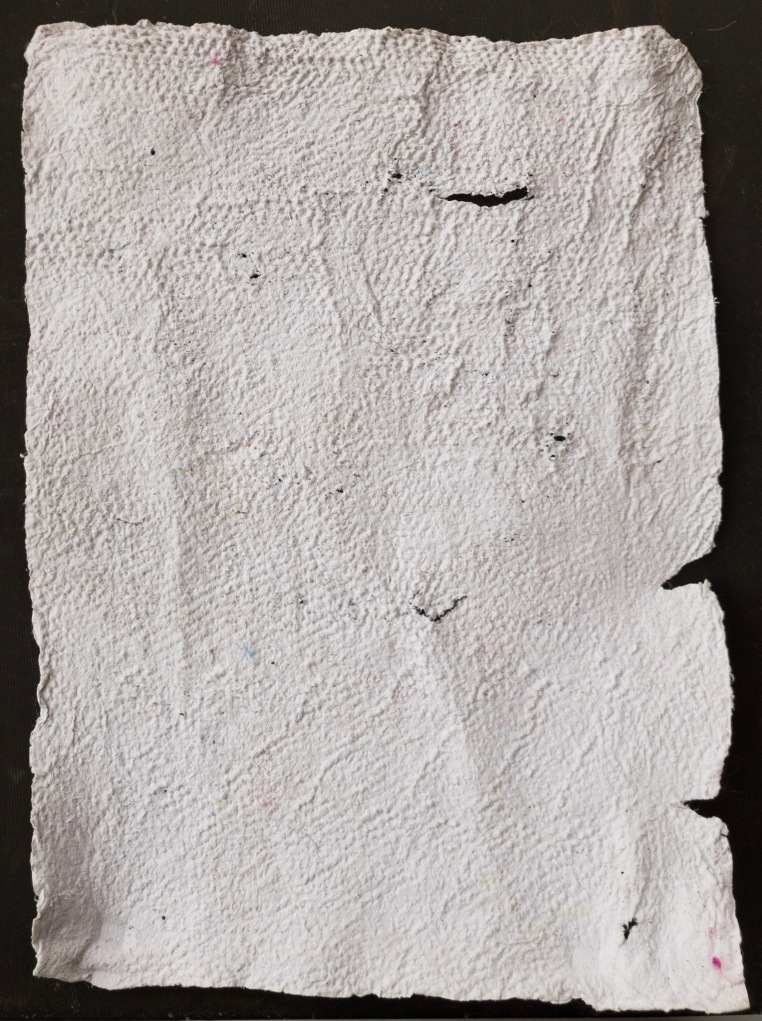 These two papers have been manipulated to emulate softness and absorbency.

In the first I have textured the paper using the multiple wire points on my fleece blending board.

In the second I have pricked through the paper all over with a needle felting needle. This second one was tedious and the holes still tend to present in rows rather than giving an all over soft appearance.

but the hand of both of these is definitely softer than the original paper.

This is a third attempt at creating a soft looking paper. I have used two layers of paper and sewn them together in parallel lines. I then cut through one layer along the lines. This is similar to how I have read about making a chenille like fabric.

It didn’t look at all soft after this process so I then wet it and massaged it a bit to create this holey and soft paper.

With this paper I am looking at the way the watercolour forms an irregular line where it meets its neighbouring patch of watercolour. I have used Joomchi to meld strips of paper lightly together after I have burnt there edges to give a darker irregular line.

It hasn’t worked perfectly because the burning paper was difficult to control and disappeared quickly, but I was impressed by the resulting dark edges and this would be one of my favourite paper manipulations. 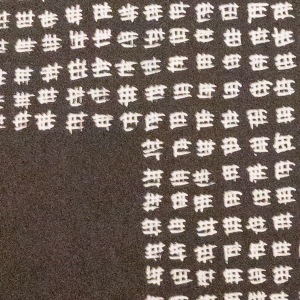 Here I am looking closely at the repeating motif and the various irregularities within the same motif.

I have taken a stiff piece of watercolour paper and cut out the motif all over. It has resulted in the loss of the central square segment of the motif.

Another in interesting way of presenting this may have been to cut out the four little squares that are formed within the motif.

With this segment from one of my collages, I am taking inspiration from both the T shaped kimono motif, and the ethereal red overlay, with its spidery interplay of threads.

I have not had a great deal of success in referencing the fine random layout of threads, but my results are below.

These first three are experiments with embossing the paper. I have used the geometric kimono shape and various combinations of my body weight, a towel, the septic metal cover, heavy paper cutouts and a Perspex paperweight, to try and create a geometric embossing into soaked printmaking paper.

The most successful was the septic tank cover as I was able to walk on the paper and apply my full body weight in one go.
The paper cut outs one was more subtle because I couldn’t create the full print experience here using only a metal pipe and a towel.﻿ 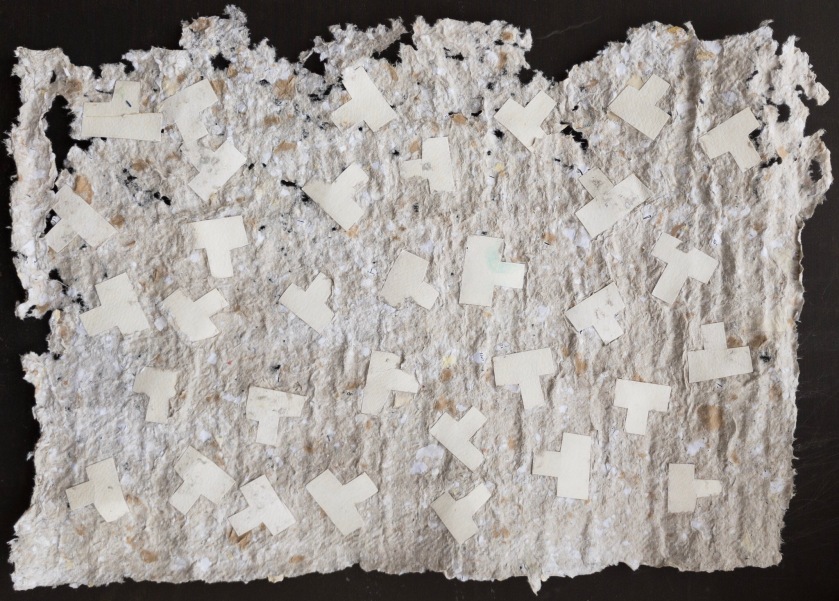 This paper manipulation involves further exploration of the T kimono shape by using cutouts (the same ones that were used to emboss above) and embedding them in paper pulp.

I wasn’t so keen on this one as it looks a bit too close to the original collage with its paper cutouts glued to a surface.

The next two views are of the same paper. I have used joomchi to embed a geometric shape in the paper. It’s only really evident and effective with the light behind it.

Here I am referencing the gauzy lines of the red non woven fabric overlay, by folding random straight lines multiple times and from both sides. I had hoped to create the sense of looking into another landscape that I get from the red fabric, but this looks pretty flat. 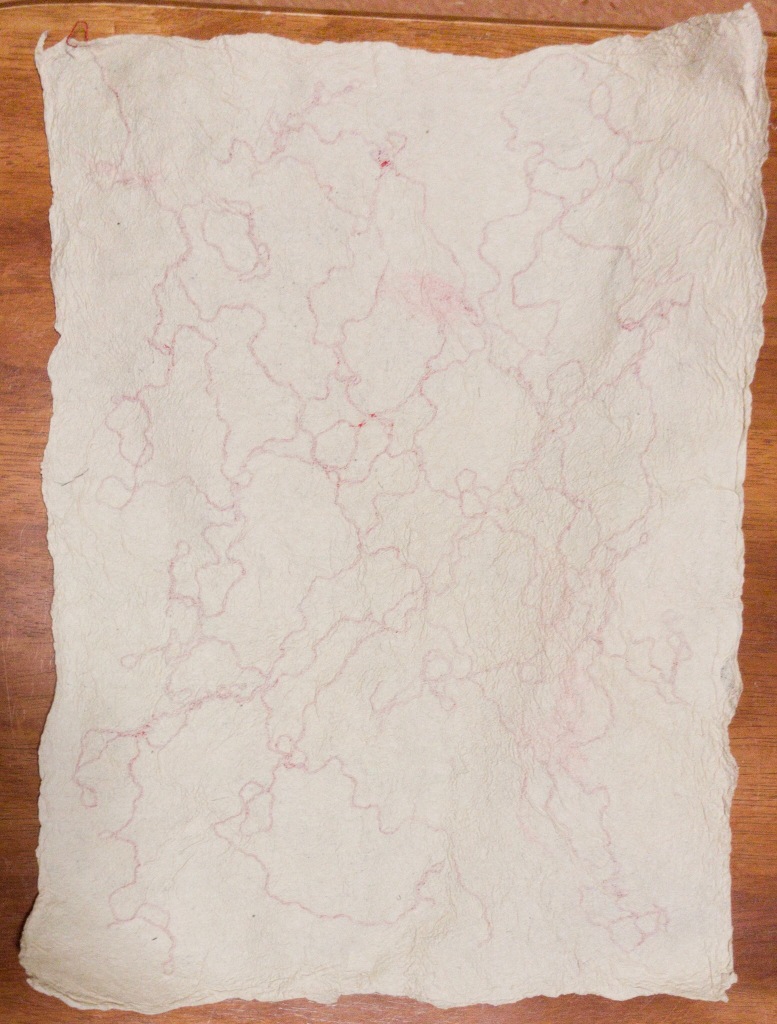 This is a different attempt using cut paper glued to a backing. Also too chunky and coarse.
And this one is some red threads held between two pieces of paper laminated with Joomchi.
I’m hoping that some of these may nonetheless provide an OK starting point for the next phase of the exercise.

This grass drawing is the inspiration for the next papers. I am focussed on the tangle of fine lines 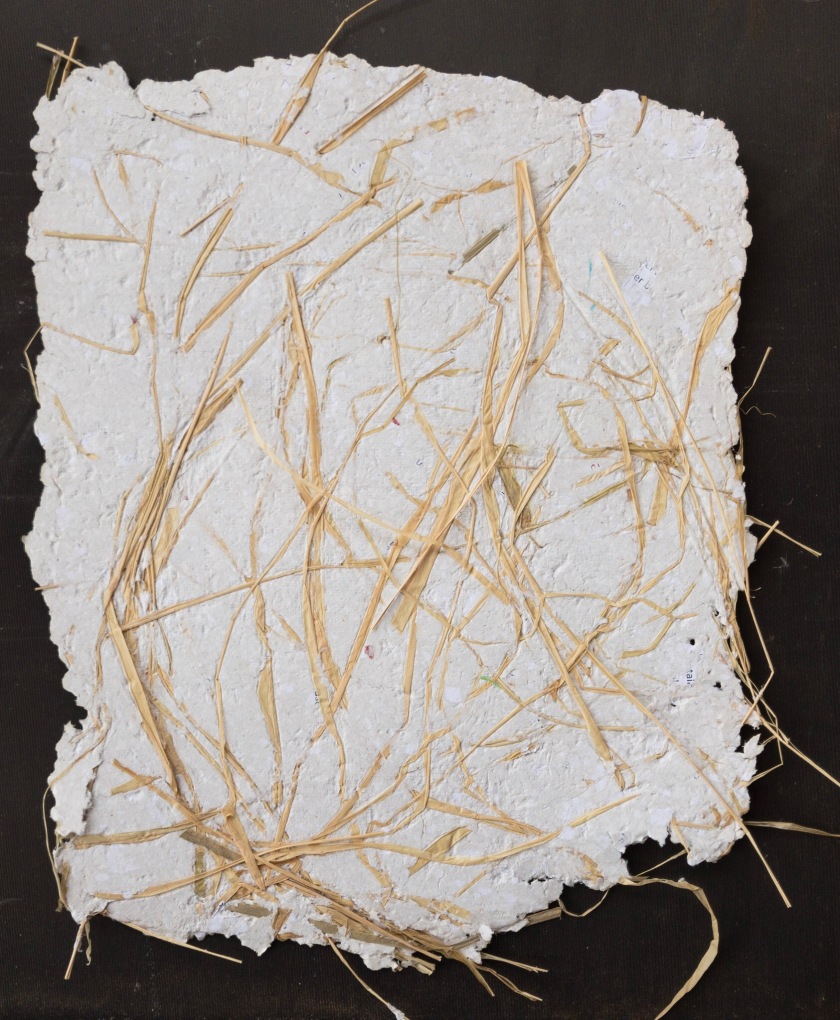 My attempts with using raffia were too chunky. I struggled to embed fine threads of raffia but they tend to sit on the surface and look too coarse. I tried with different finer threads but they were lost or clumped in the pulp.

This one was slightly better because I have tried to separate the strands more with holes but still very gross representation of the characteristics of the original drawing.  Would need to use much finer pulp and laid threads to resonant better with the drawing but I wasn’t able to achieve that this time.

For me this drawing suggests opening and down a tunnel with it’s contour lines.

I have tried to take this idea and manipulate the paper to also suggest these features for the next few papers. 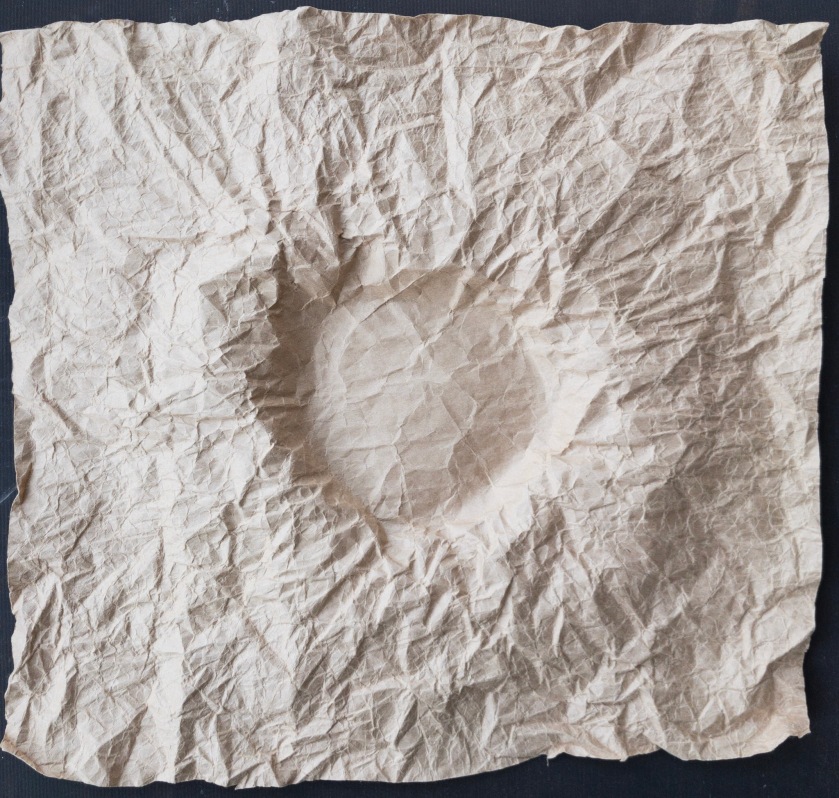 Here I have crumpled heavy brown paper more around the outside and less in the middle to try and suggest depth. I also puddled water in the centre to further relax the paper and smooth the central area. Burnishing didn’t work to do this.

I would have liked a more gradual transition but not sure how to achieve that at this stage.

This paper is created by folding and then cutting concentric ovals. I had to be careful that I didn’t cut all the way around otherwise the centre would have fallen out! This one is ok and does reference the characteristics of the drawing a bit better I think. 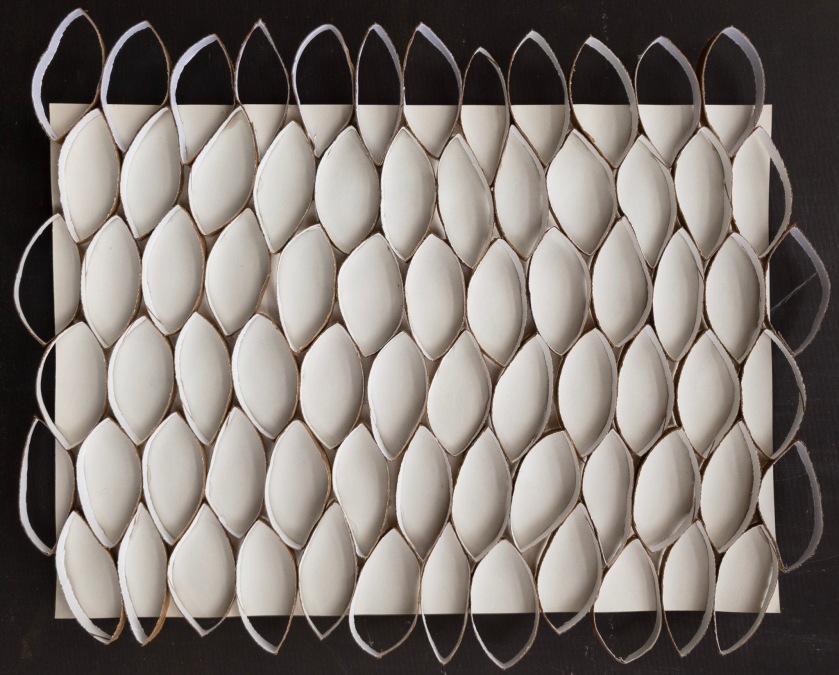 I used toilet roll centres to cut these ovals and then glued them on to a backing.

I’m quite interested in the optical illusion in the photo that makes it look like the paper is alternately bulging and recessed.

Here I am simply looking at the outer shape of the drawing of the open bag above, and repeating that across the page.

I love the falling lines depicting drape in this drawing and I have tried to translate that into the paper below. 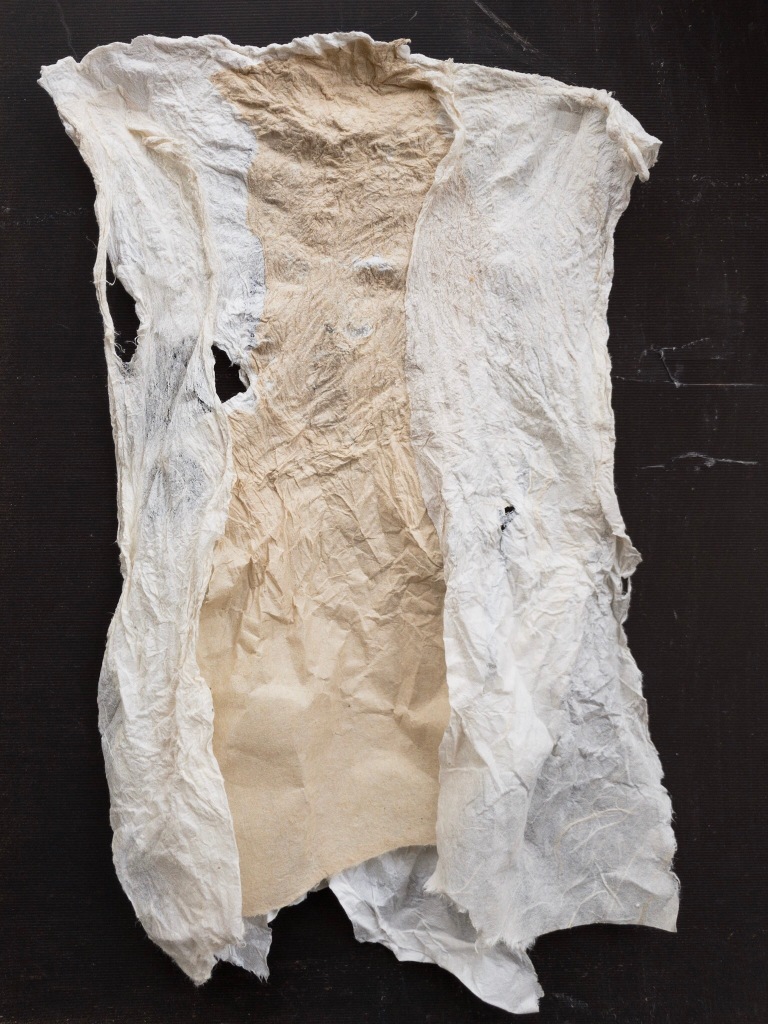 The torn pieces of paper are melded together at the top with joomchi and allowed to fall freely at the bottom.

I think this is quite successful in giving a sense of falling line and drape in paper.

The thick overlapping ink of this drawing is the feature I would like to reference in this final paper manipulation.

I have several layers of paper here massaged together using the Joomchi technique in an attempt to create areas of variable thickness and subtle variation in tone. I didn’t think that it was overly successful but seeing it placed below the photo I am thinking it’s actually not too bad at suggesting this characteristic of the drawing.

This is some rusted paper that fell apart, salvaged by using Joomchi. I’m including this in my paper manipulation library and considering that it arises out of attempting to meld paper into layers of different thicknesses as in the different thickness of ink in the above drawing.